On 21st April 1509 the elderly King Henry VII died and his eighteen year old second son became King Henry VIII of England. Young Henry was taller than the average Tudor man, athletic, creative and handsome with a love of music and a keen interest in the latest fashions; quite a change from his dour, dull and penny-pinching father.

Thus started the reign of a most memorable and famous King who, through his decisions and actions

would determine the course of English history……….the turbulent Henrician era had begun.

The young Henry VIII. The eighteen year old fashionable dandy of his time.

Having created my Young Katherine of Aragon doll first (see previous post), I wanted to match and tone the colours of Henry’s costume to those used for Katherine. I also wanted to give the feeling of youthfulness and hope which is why I kept the colour scheme light and fresh. It is also true that at this time (1509/10) the dour and dark colours of Henry VII’s reign did briefly go out of fashion for younger people. However, darker colours did return to fashion within the next few years although they were mainly used for accent rather than for a whole outfit.

(After the frugal Court of the elderly King Henry VII, the older courtiers must have had quite a shock when the vivacious new teenage King spent a fortune in brightening the ‘old place’ up for himself and his young, exotic Spanish bride. Henry VIII would become known for his lavish spending! )

In deciding the style of Young Henry’s costume, I designed it using a mixture of styles found in costume reference sources in books and on the internet . I also found the the following portrait of a very young Henry:

Henry’s hair style is typical of the very early Tudor era, worn long and straight; very different from the much shorter styles of the mid-Henrician era that we are more familiar with. The hat in this portrait is still quite Medieval in style being round with a turned up brim, decorated with brooches. The robe with its heavy and wide fur collar would continue for many years although in this early period, it is not as padded and large as it would become mid era. Below is a close up picture  of the top half of Young Henry:

I chose to make a slightly different version of the hat with a more pointed crown but still with the turned up brim. It is difficult to see in this picture but the brim is also notched as was the high fashion of the time. As described in many contemporary descriptions, Henry has the auburn hair that he (and his children) were so famous for, styled loose and shoulder length as described before. You can just see the top of the fine silk shirt with its fancy gold band, over which there is a jewelled gold necklace with diamond shaped peridot pendant. I chose to make the V-necked doublet in pale almond green silk brocade to tone with the colouring on Katherine’s under-gown. The heavy jewelled chain around Henry’s shoulders is made from a metallic gold braid with flat backed pearls and crystals added to each section and joined at the centre front with tiny golden jewelled filigrees. Below is a close up of the lower half of Henry’s costume: 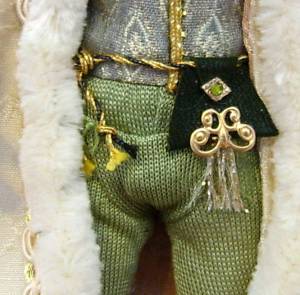 Close up of purse and (nervous cough!) the required codpiece!

You can see from the picture above that the doublet finishes just below the waist and there is a fancy cord belt tied over it to hold the decorated leather purse. During this early Tudor period, the hosen (leg coverings) were still very Medieval in style and full-length, very much like our modern day tights (panty hose). (Later on the hosen would become more like stockings). During the 1500s it was still very fashionable for younger men to display their shapely legs fully. Although quite a delicate subject nowadays, the codpiece was also very important part of the gentleman’s costume. At this time it consisted of a triangular flap laced to the main part of hosen and was not padded or emphasised as in later fashions. It was merely practical to cover the privates but convenient enough to undo in order to pee.

I used a fine silk jersey fabric for Henry’s hosen and hand-dyed it to tone with the colour scheme used for Katherine. At first I dyed it to match Katherine’s under-gown but felt that the paler colour was too feminine for Henry so I decided to re-dye it a few shades darker. The codpiece caused me quite a lot of trouble regarding trying to make it look right and not ridiculous! Without any form of ‘filling’ in it, it looked wrong and with too much, it looked equally wrong. Having tried tiny amounts of cotton wool and then toy stuffing, I was about to give up when I noticed a little scrap of the silk jersey on the floor that had missed the bin. A few minutes of rolling, scrunching and hand stitching later, Henry’s annoying codpiece was annoying no more! Below is a close up of Henry’s leather shoes:

Once the problems of the hosen were overcome the shoes were quite simple to make. At this time, the slim, more pointed shoes of the Medieval period had given way to a new German-style fashion of very wide-toed shoes. These shoes were very flat and could be worn either with or without a strap across the instep and were often slashed to reveal a different coloured leather through the slashes. The width of the square shaped toes was often highly exagerated and much wider than the foot of the wearer, often being padded out inside………something that would also become popular with the robe and doublet of later times. Below is a close up of the robe and doublet sleeves:

I chose to make Henry’s robe from cream silk jacquard as I wanted to emphasise the freshness of youth and also not have him clash with the fabric used for Katherines gown. The length of the robe is fashionably short to just above Henry’s knees and the cream ‘fur’ trim (made from chunky chenille yarn) extends into the typical Tudor fur collar around the shoulders (you can see this better if you scroll back up to the full-length picture at the start of this post). I also added a fancy cream and gold braid for more opulence.

At this time, the sleeves of the robe were often very long (past knee length) and unpadded. If worn long, they were slashed about half way down the length for the wearer to put his arm through comfortably. Henry’s robe sleeves are also lined in a biscuit coloured silk which you can just see in the above picture. Slashing was an extremely popular German fashion and continued to be much favoured for most of the Henrician era. It was often seen on doublet fronts, shoes, sleeves and also in ladies sleeves later in the period too. You can see that Henry’s doublet sleeves are fashionably slashed at the elbows to reveal the silk of his shirt underneath.

Whilst Henry took a very long time to design and complete, I thoroughly enjoyed the challenge of his making. It is with poigniancy though, that I look back over the reign of this most memorable of rulers. For me there are so many ‘what ifs’ about Henry’s life. For example, what if his first son with Katherine had not died in infancy……..would that have made Henry different, I wonder? The start of Henry’s reign and also the start of his first marriage seemed to hold such promise for the future, such triumphs and victories. I have always felt that it was very sad that this particular love story ended so sadly and bitterly.

Henry and Katherine (together again if only in doll form)

Until next time, bye for now!

11 thoughts on “ANOTHER BRAND NEW DOLL. YOUNG HENRY VIII: A NEW KING FOR A NEW ERA.”

This site uses Akismet to reduce spam. Learn how your comment data is processed.